Have you ever wondered how some websites protect themselves from DDoS attacks or why we get status code HTTP 429 in response to calling some API (Ex: GitHubAPI) too many times. The solution behind them is Rate limiting.

What is Rate Limiting?

Rate limiting is used to control the amount of incoming traffic to a service or an API. For example, an API limits 100 requests per user in an hour using a Rate Limiter. If you send more than 100 requests then you will recieve TooManyRequests error. This way it controls incoming traffic as well as mitigates the DDoS attacks.

In this post, we will be discussing more about API level Rate limiting using GoLang.

Above code snippet listens at end point localhost:8888/hello . We are limiting the number of incoming calls to the endpoint by calling ratelimit method before calling helloHandler. This ratelimit method decides whether the incoming request should be processed or rejected. Let’s implement the ratelimit using package x/time/rate. This package internally implements Token bucket algorithm which we will discuss in the next section.

At line 8, we first created a global instance of Limiter by calling NewLimiter with rate and burst equal to one. The ratelimit method accepts helloHandler as parameter and returns a new http.HandlerFunc. At line 12, new handler checks whether the request should be processed or not. If not, it will respond with status code http.StatusTooManyRequests else it proceeds.

For example, i ran the above code locally and sent two requests concurrently. One of them failed with the below error which is what expected 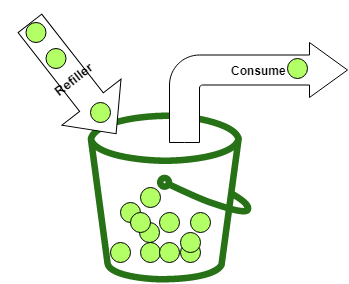 Result of running the above code can be seen in the below image. First Go Routine was able to access the token and remaining Go Routines failed to access because only one token was available at that second.